The Friends of Cockspur Lighthouse goes back for over a decade and was established to act in unison with the National Park Service (NPS). First order of business was to foster a strong bond with the NPS so the two could work in conjunction with one another. In the early days there was three names that stand out Mr. C. Harvey Ferrelle, John C. Wylly, Jr. and noted lighthouse preservationist Mr. Cullen Chambers. Mr. Chambers worked on other legendary lighthouses throughout the southeast, including the Bahamas and the larger Tybee Lighthouse.

The second step after forming this new relationship with the NPS was to establish themselves as a Not For Profit 501 3(c) group. With this major step behind them they now set about creating a list of priorities and goals to stabilize as well as provide for continued preservation. As a result of the concerted efforts by many people with the “Friends” and the NPS a Grand Re-Lighting ceremony was scheduled in 2007 and was officiated by the retired Rear Admiral David W. Kunkel. This event marked the first time the light had been on in nearly a century.

Prior to the “The Friends” forming, the NPS had been busy evaluating and addressing issues such as the wood pilings being infested with shipworms. In 1909, the dome had fallen into a sad state of being and the light was removed in order to resurrect its former glory. A study conducted by the NPS concluded that the mortar was in a failing state and needed to be addressed. However, a main concern was the erosion that was occurring on the oyster bed on which the lighthouse resides. 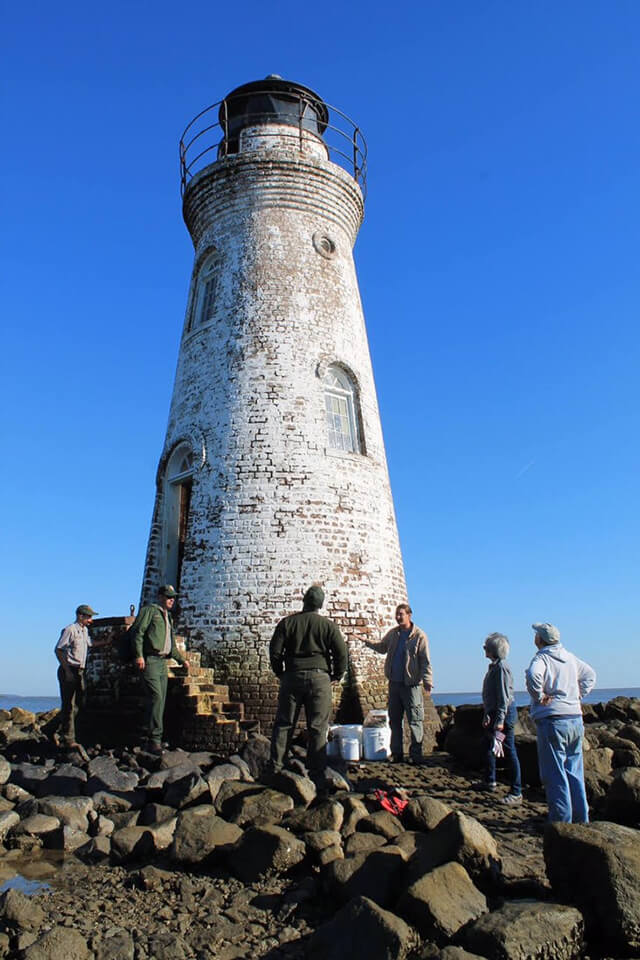 History of The Cockspur Island Lighthouse

Situated on an islet off the southeastern tip of Cockspur Island marking the South Channel of the Savannah River, the Cockspur Lighthouse is stands twelve miles east of the port of Savannah. The islet, often covered by high tide, is comprised of oyster shells, and marsh grass. Documented references suggest the first brick tower, used as a daymark, was built on Cockspur Island between March 1837 and November 1839. In 1848, John Norris, a New York architect, was contracted to supervise construction of an illuminated station. The noted architect designed many of Savannah’s grand structures including the U.S. Custom House in downtown Savannah, the Mercer-Wilder House, and the Green-Meldrim House, where General Sherman stayed during the Civil War.

Norris’s duties were to “repair, alter, and put up lanterns and lights on Cockspur Island…and to erect a suitable keeper’s house.” This first tower had a focal plane 25 feet above sea level. The beacon housed a fixed white light emanating from five lamps with 14-inch reflectors visible for nine miles.

Tragedy struck again in 1854 when the structure was destroyed by a hurricane. The tower was rebuilt and enlarged on the same foundation the next year. At the start of the American Civil War, the light was temporarily extinguished. On April 10, 1862, Union forces in eleven batteries stretching along the beach at Tybee Island, started a long-range bombardment of Fort Pulaski. Thirty-six guns participated in a thirty-hour siege of the fort with the Cockspur Lighthouse in direct line of fire.

Following the surrender of Fort Pulaski on April 11, 1862, the little beacon miraculously only suffered minor damage. Theories abound as to why the tower escaped destruction. One theory suggests to effectively hit the Fort walls approximately 1,500 yards distant, Union artillerists had to fire shots at a high angle, thus passing over the tower. This strategy, coupled with the short duration of battle could explain why the tower was spared. Soon after war’s end, April 25, 1866, the beacon was relit and painted white for use as a daymark. 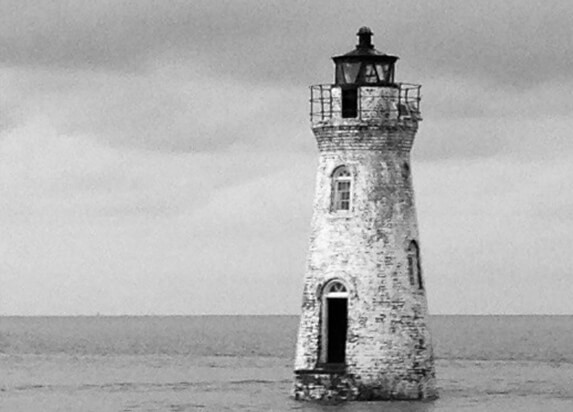 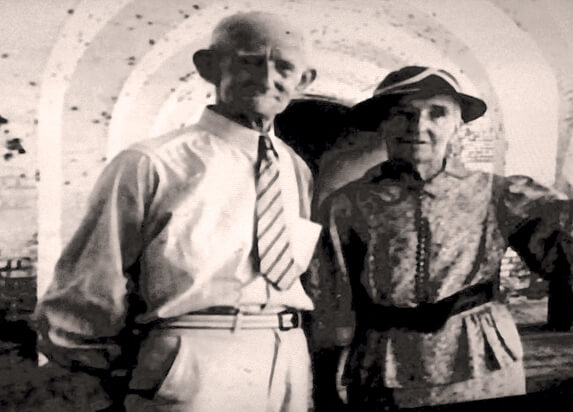